WINNER OF THE NATIONAL JEWISH BOOK AWARD FOR DEBUT FICTION 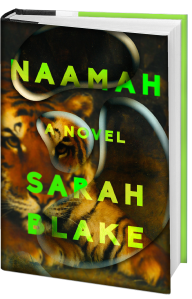 With the coming of the Great Flood–the mother of all disasters–only one family was spared, drifting on an endless sea, waiting for the waters to subside. We know the story of Noah, moved by divine vision to launch their escape. Now, in a work of astounding invention, acclaimed writer Sarah Blake reclaims the story of his wife, Naamah, the matriarch who kept them alive. Here is the woman torn between faith and fury, lending her strength to her sons and their wives, caring for an unruly menagerie of restless creatures, silently mourning the lover she left behind. Here is the woman escaping into the unreceded waters, where a seductive angel tempts her to join a strange and haunted world. Here is the woman tormented by dreams and questions of her own–questions of service and self-determination, of history and memory, of the kindness or cruelty of fate.

In fresh and modern language, Blake revisits the story of the Ark that rescued life on earth, and rediscovers the agonizing burdens endured by the woman at the heart of the story. Naamah is a parable for our time: a provocative fable of body, spirit, and resilience.

Sarah Blake’s dazzling Naamah offers a new vision of storytelling and belief, rendered through the body of a woman. In between hope and hell, and up against the divine, Naamah reminds us that the bodies and voices of women were always the heart of the story. Naamah is a new myth-making triumph.

—Lidia Yuknavitch, author of The Book of Joan and The Small Backs of Children

Sarah Blake has crafted a haunting, mesmerizing fever dream with Naamah. Every sentence thrums with life and beauty, even as her characters struggle against the prospect of the never-ending flood.
—Peng Shepherd, author of The Book of M

“An award-winning poet offers a dreamy and transgressive feminist retelling of the Great Flood from the perspective of Noah’s wife as she wrestles with the mysterious metaphysics of womanhood at the end of the world.” —O, THE OPRAH MAGAZINE

“A shimmering and visionary feminist debut . . . Naamah is hallucinatory, full of unearthly visions, and yet boldly, vividly embodied. It is a singular and timeless portrait, a deep and gorgeous contemporary evocation of an ancient woman asking unanswerable questions about the end of an existing world.” —SAN FRANCISCO CHRONICLE

“Historical and mythical women . . . are getting due reconsideration in pop culture. Sarah Blake does something similar with the story of Noah’s Ark, reconstructing that well-known tale around the woman by Noah’s side” —ELLE

“Naamah should be next on your list.”—MS. MAGAZINE

“[I]t’s a story about the many who died to make a new world, about the messiness that goes into taking care of animals, about faith in a future one can build. Blake turns this biblical tale on its head, making it more challenging and moving in the process.” —PASTE MAGAZINE

“The book is a testament to the idea that more than one sex, more than one idea and more than one individual makes the world in all its glory and tragedy.” and “With her modern interpretation of the Book of Genesis, Blake fills the mostly absent references with a wholly unruly woman.” —THE WASHINGTON POST, here and here

“Blake’s lyrical prose sweeps over the reader as inexorably as the water around the ark, but her genius is in making Naamah’s life as relevant as if she were alive today.” —SHELF AWARENESS, starred review

“Like the ark itself, Naamah houses an improbable bounty of life. Blake has packed a remarkable amount of earthly experience—wondrous and funny and queasy and erotic—into an ancient vehicle, and made it sail.” —LAMBDA LITERARY

“Blake’s prose is bewitching, and this narrative is an essential correction to the Bible’s male-dominated mythology. Women have always been central to these stories, but it is through storytellers like Blake that they are finally allowed to take their rightful place.” —NYLON

“In a stunning, feminist retelling of Noah’s Ark, Blake’s debut novel focuses on Naamah (Noah’s wife) and their family in the year after the Great Flood. Full of desire, fury, strength, and wavering faith, Naamah becomes the bedrock on which the Earth is rebuilt upon.” —THE MILLIONS

“There is something so hypnotic about Blake’s retelling of this well-told tale.” —ALMA

“In Blake’s new fable, those desires—for the freedom of movement, sexual expression, and loving connection—are what ensure that those aboard the ark, and all humankind to follow, will survive and flourish.” —LILITH

“[I]t’s a novel that uses an ancient tale to ask questions that are contemporary and urgent: What does it mean to be a woman? Who gets to be named, and remembered, in our stories? What are we willing to sacrifice in order for something new to be born?” —CHRISTIAN CENTURY

“Generations of Genesis readers have probably imagined Noah’s wife as obedient, chaste and reverent: so unobjectionable she does not merit much mention. Blake depicts Naamah as someone much wilder” —AMERICA THE JESUIT REVIEW

“Revelatory, ethereal and transfixing, Naamah cracks open the ancient tale of Noah. . . . In the tradition of Madeline Miller’s Circe, Naamah plucks a female character from myth and imbues her with sexuality, personality and intimacy, making her an altogether more modern hero.” —BOOKPAGE

“Blake’s tale is a powerful exploration of the trauma of change and the reckoning required to move on from unimaginable loss.” —BOOKLIST

“Ingenious and highly imaginative, this debut novel is sure to spark conversation” —LIBRARY JOURNAL

Named one of the most anticipated books of 2019 by THE RUMPUS, THE WEEK, READ IT FORWARD, THE PHILADELPHIA INQUIRER, and more

NAAMAH appeared on these very cool lists at AUTOSTRADDLE, SYFY WIRE, LIT HUB, READ IT FORWARD,  THE LOS ANGELES TIMES, and even on BOOKRIOT’S amazing podcast ALL THE BOOKS!

Read interviews at ALMA, THE PHILADELPHIA INQUIRER, GUERNICA, BUSTLE, and ELECTRIC LITERATURE and enjoy this Behind the Book essay